If one buys an old, rural house most anywhere in the world, one has to expect to do some renovations. How much and to what extent of course depends on a number of factors including how much renovation was done before you make your purchase.

We purchased our house in Hungary about ten years ago when it was estimated to be the ripe age of 80 years old. This placed its construction in the early intra-war period, when it is widely considered here to be a good period for construction (good materials, workmanship, etc.). There must be some truth in that. Only as our house approached 90 years old did I start to notice signs of problems with the roof. I have known a few old roofs in my time (having, for example, lived in the States in a 1880’s Victorian farm house), and I find that roofs (especially the wood) do not senescence linearly. Instead, they appear to do quite well until just before the end, and then catastrophically fail with alarming rapidity. 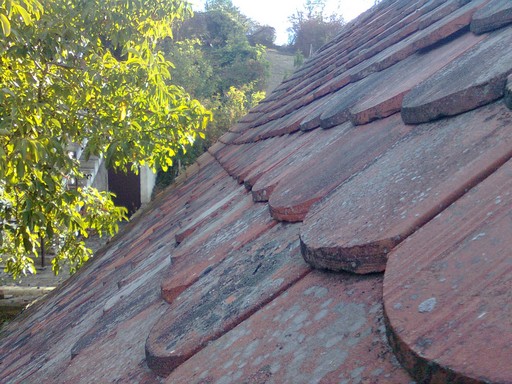 Roof shingle tiles at the far end of the photo are starting to show a slight bowing inward toward the house interior. Wood battens may be failing due to age, dry rot or moisture damage. In any case, it is a sure sign that further investigation should be taken. 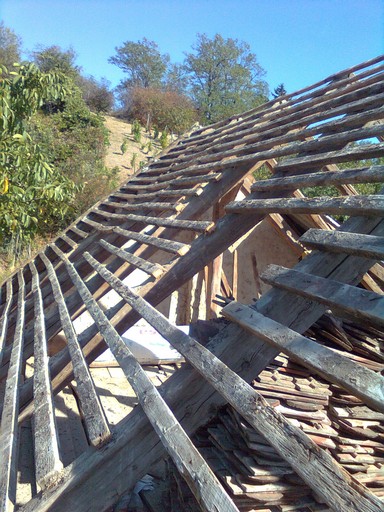 With shingle tiles removed the old bowing batten wood is easier to see. Overall the battens were in decent shape, but some where starting to show signs of dry rot (seen in image foreground). The rafters however were still in excellent shape. To have delayed roof replacement more than a few more years may have resulted in damage to the all important rafters.

Before I go on with discussing the renovation, I would like to inject that after I proved to a couple of Universities that I knew a thing or two about what they taught, I actually ended up making part of my post graduate living for some time doing construction and renovation work. No complaints about that as I think everyone should learn a trade. And it did provide me with knowing a thing or two about construction. And from that I would like to convey a credo I have learned to live by:

There are two very important and fundamental relationships in a man’s life that he should not take lightly nor rush into too quickly. He should look around with great care and diligence so as to ensure that the relationship and partner he chooses is a good match for his needs, wants and desires. These are a man’s Wife and his General Contractor.

To make a long story, a great deal of our larger renovation projects (such as new roofing) have actually been on hold as we “tested” contractors for competence. After a long time and some failed attempts, I am happy to report that in the last year I count myself a fortunate and happy man indeed with two solid working relationships.

Now, with all that being said, follows is a photo montage of some interesting features of our old and new roof: 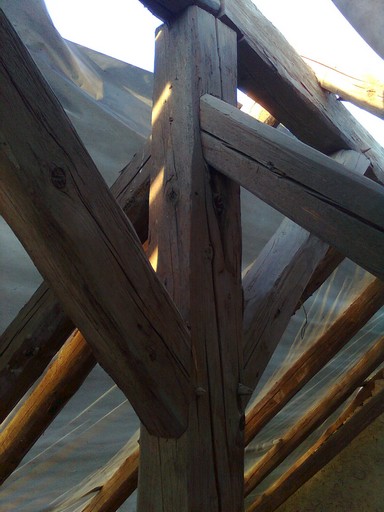 Our house’s roof is constructed with a post and lintel system with hand-hewn timbers. All joined with tenons and hand-hewn wood dowels without a single metal nail. Despite their age, all the massive timbers are in excellent condition and the new roof was laid over them.

View of Lake Balaton through the hand-hewn roof rafters after shingle tiles and battens were removed. 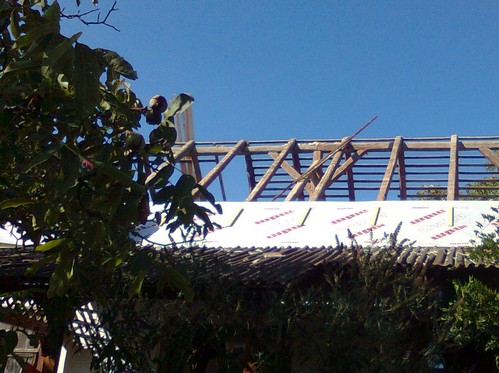 A modern moisture barrier being installed over the rafters.

New shingle tiles installed just in time before the rain.

End note: Most of our old roof has been or will be recycled. Our old shingle tiles that were not too old, worn or damaged were salvaged, stacked neatly on pallets and given to our contractor for resale. All the old battens will be cut up for firewood. Old iron parts are turned in for scrap metal value.