I think most every gardener knows that to get the most out of a crop one must from time to time thin some growing plants. Of course “thinning” is the politically correct way of saying some plants are ripped out, casts aside and killed. Brutal stuff.

We do cane pruning on many of our adult vines. An ideal inter node distance between cane buds is about 10 cm (4 in). The point of thinning buds is to prevent too thick a canopy from growing, which can lead to more fungus growth, and less light on leaves, which then delays ripening or reduces sugar content in the fruit.

In ideal years, and on healthy vines, the canes produce buds at about the ideal distance. But the inter node distance can be shorter if, for example, there is not enough rain in the last year’s growing season, which can stunt growth. Much of the Northern Hemisphere last summer was in drought, so it is no surprise some of our canes had very short inter node distances between buds this spring.

Normally, buds are thinned in the early spring before they burst with leaves. I missed a few this year, and thought they would be a good photo opportunity to better show some before and after thinning examples. 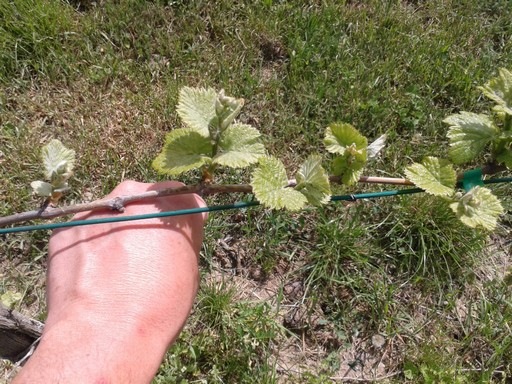 Before thinning. My closed fist is about 10 cm (4 in) wide, which is a good inter node distance for new shoots. Shoots closer than my fist width should be thinned.

After thinning. You can see the buds on the right have been removed as they were too close to other buds.